You need only to look at Rabbi Michel Twerski to know how strongly he has been shaped and influenced by the past – the history of his family and the Jewish people as a whole. And you need only to talk to Rabbi Twerski for a few moments to know how much in touch he is with the present, both in terms of his understanding of the contemporary world and his intense drive to get the most out of every moment.

In traditional Jewish circles, a rabbi is far more than a person who leads religious services and officiates at life cycle events. He is counselor, teacher, guide, judge of disputes, authority on religious questions of great variety, community leader. Rabbi Twerski fills all of those roles in the community he leads in Milwaukee.

Any description of Rabbi Twerski has at its root each of his parents, of blessed memory, Rabbi Jacob Twerski, ZT”L and his wife, Rebbetzin Leah Twerski, ZT”L, who came to Milwaukee 90 years ago and became towering figures in the lives of hundreds of people. Each was a person of high intellect and great warmth – people who were totally committed to helping others. They connected with people of almost every stripe and left every person and institution they dealt with uplifted by the integrity of their personalities.

Rabbi Michel and his twin brother, Aaron, were the youngest of five children in the family, all boys. In a city and Jewish community that was much different then is true today, they were brought up with few contemporaries who had the same commitments they had. But there was never any doubt of what direction they were headed – all five became ordained rabbis and, even as most pursued more secular careers, they never wavered from the traditions into which they were born.

After attending public school in Milwaukee, Rabbi Twerski went to yeshivas in Chicago, Baltimore and Lakewood, NJ. Lakewood, where Rabbi Twerski received his ordination, was then a small rabbinical seminary; it is now the largest yeshiva in the world. He married Feige Stein, whose family lived in Brooklyn, and the couple moved to Milwaukee in 1962. Rabbi Twerski became assistant rabbi to his father at Congregation Beth Jehudah. As he learned from and worked with his father, he also pursued studies at Marquette University, receiving a Masters of Science Degree in Clinical Psychology, completing all the work on a PhD. in Educational Psychology except for writing a dissertation.

It was in that era that the Rabbi’s interest in music blossomed. He had almost no formal musical training as a child. As a young adult, he was given a guitar and, with minimal lessons, he was soon able to use it to accompany himself in playing the melodies that came to him. The 1960s and early ’70s were years when Rabbi Twerski composed many of his most lasting melodies. Songs such as the Rabbi’s melody of Modeh Ani, the prayer said on waking in the morning, are sung around the world. In 1966, prodded and assisted by friends, the Rabbi created the first formal album of his work Kol B’Rarna, “A Voice on High”. Many of his songs written since then, including other ballads and a melody for the Friday night prayer “Lecha Dodi,” have been more elaborate and musically developed than the early melodies.

Rabbi Twerski continued to compose and sing for friends and small groups in the following years, but as the demands on him grew and changed and as the community developed, his musical interests did not take as prominent a place in his public life. In 1973, his revered father passed away and Rabbi Michel became the head rabbi of the congregation. The demands of that position and of a growing family further put writing and playing music somewhat to the side.

By the early 1980s, the shape of the community around Congregation Beth Jehudah – and the shape of Orthodox life throughout the United States – was changing rapidly. An older generation, many of them immigrants, was passing and relatively few of their own children remained traditional in their religious practice. But a small yet strong tide of young adults was finding out about and choosing to be part of Orthodox life. They were having a profound impact on many Jewish communities, Milwaukee included. The Twerskis, with their ability to connect with non-Orthodox people, became nationally recognized figures in fostering the growth of the Baal Tshuva movement, as it was called.

At a Beth Jehudah Sabbath retreat in 1983, Rabbi Twerski debuted a new song “The Tree,” the first of what has become a set of parables done in ballad form. The song, a tale of deferred and missed opportunities for spiritual growth, has had a marked impact on many who have heard it in following years and it marked a new stage in Rabbi Twerski’s musical accomplishments.

In 1989, Rabbi Twerski led efforts to create an elementary school and Kollel adult learning program in Milwaukee aimed at serving the needs of a community increasingly interested in traditional Jewish education. The two institutions have been keys to the growth of Orthodox life in the city. They have greatly changed the nature of the congregation the Twerskis lead and the demands and roles of both Rabbi Michel and Rebbetzin Feige. Each of the Twerskis is also now widely known nationally and they are often called upon to speak in other cities or to counsel people from far beyond Milwaukee.

In the stressed and pressured world that Rabbi Twerski operates in today, it would be easy to forget music almost entirely. Who has time for it? There are too many people to help, too many issues to be dealt with, too much learning to do. And that’s not to mention the deep involvement both the Rabbi and Rebbetzin have with their 11 children and numerous grandchildren. Where can you fit music into all of this?

The answer is: everywhere. The Twerski involvement with music is an every-moment matter. While learning, while driving, while walking, at meals, there is always a niggun on the mind and often on the lips. To not be musical would be to deny life the richest melody it could and should have.

And in giving voice to the songs within him, Rabbi Twerski has given richer melodies for living to all who join in. Because G-d has used him so often and so well as the instrument to play new songs, thousands of others have heard notes from a spiritual Stradivarius.

Rabbi Twerski would say strongly that within each of us lie melodies filled with grandeur and nobility. But we need help in giving voice to those melodies. Few of us have the gift – or have been chosen to be the instrument – to put our aspirations and emotions into music. Who doesn’t want to sing the way a Chassid sings, with vitality, depth, joy and energy?

Rebbetzin Feige Twerski of Milwaukee, Wisconsin, has devoted her life to Jewish education and outreach. Having lectured worldwide on a myriad of Judaic subjects, she is acknowledged as both imaginative and inspirational by audiences everywhere.

In addition to her responsibilities as Rebbetzin of Congregation Beth Jehudah, she is a close companion to her husband in his counseling and outreach efforts, and co-directs the many retreat weekends the Twerskis participate in throughout North America and beyond. She and her husband are founders of the Torah Foundation of Milwaukee, and they have both been at the forefront in the development of both a Yeshiva Day School and a Kollel in their community.

A descendant of a Rumanian Chassidic family, whose roots go back to the great Chassidic masters in the era of the Ba’al Shem Tov, The Rebbetzin came to the U.S. as a young girl. She attended the Bais Yakov school in Brooklyn, NY and later graduated from its Teachers Seminary.

Notwithstanding her communal role, Rebbetzin Twerski considers her family her primary responsibility. As the mother of 11 children and over 30 grandchildren, she is a glowing example of a contemporary Orthodox Jewish woman who has become a pillar of strength to individuals throughout the world.

Rabbi Benzion Twerski returned to Milwaukee in 1989 to assist his father, Rabbi Michel in the Milwaukee rabbinate. This marked the beginning of the third generation of Twerski leadership at Congregation Beth Jehudah.

Schooled at the yeshiva of Philadelphia and then in Bobov, he has steadily increased the range of his teachings into the general community. Steeped in the traditions of chassidus in general, and through the close personal relationship that was developed with his great uncle, the Bobover Rav, Rabbi Benzion has been able to bridge the generations, and to bring the clarity of purpose and the joy of doing to his teachings. He was founding member of the Milwaukee Kollel. Rabbi Twerski has lectured and served as scholar-in-residence at Shabbatons in Los Angeles, Denver, Chicago, Omaha, Baltimore, Phoenix, as well as Milwaukee.

In his yeshiva and Kollel years, he published the manuscripts of his revered ancestor Rabbi Mordechai Dov of Hornisteipel in two volumes,with both enabling footnotes and indexes.

Rabbi Twerski founded the constantly growing Twerski tape series which has found great success in touching Jews throughout the world.

His interest in music in general, and his father’s music, in particular led to the production of two major concerts in Milwaukee, the first of which featured the Milwaukee Symphony Orchestra. The recording of that music was produced in Israel by The Israel Philharmonic Orchestra. In addition to this recording he has recorded three CDs of Rabbi Michel’s compositions.

His Rebbetzin, Chani Meisels is a gifted teacher and counselor, and the mother of 8 remarkable children who even at their young age give promise of leadership for many generations to come.

The community is fortunate to have him serving the congregation, and has shepped nachas in the continuing growth which he displays in every area of his Rabbinat

Rabbi Chaim and Rebbetzin Blimie Twerski returned from Toronto to Milwaukee in August 2011 to join together with his father Rabbi Benzion and his Grandfather Rabbi Michel as assistant rabbi. They are the proud parents of 4 sons and a daughter. 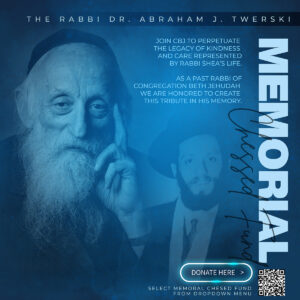